When working with real numbers, our universal set is $\mathbb{R}$. Find each of the following sets.


For each of the following Venn diagrams, write the set denoted by the shaded area.


Determine whether each of the following sets is countable or uncountable.


In this problem our goal is to show that sets that are not in the form of intervals may also be uncountable. In particular, consider the set $A$ defined as the set of all subsets of $\mathbb{N}$: $$A=\{B: B \subset \mathbb{N}\}.$$ We usually denote this set by $A=2^\mathbb{N}$. 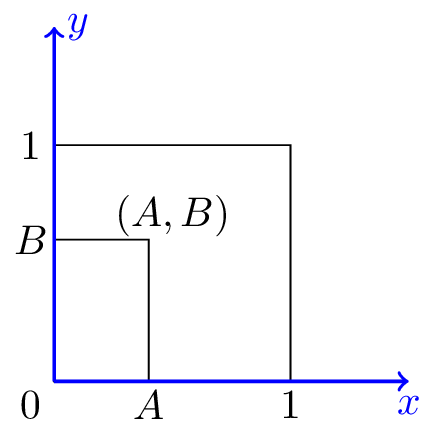 What is the probability that the equation $$AX^2+X+B=0$$ has real solutions?


Suppose that, of all the customers at a coffee shop,

Given that a randomly chosen customer has purchased a piece of cake, what is the probability that he/she has also purchased a cup of coffee?
Problem


Let $A,B$, and $C$ be three events with probabilities given below: 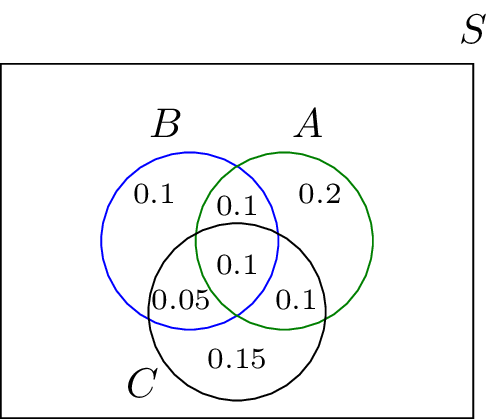 
A professor thinks students who live on campus are more likely to get $A$s in the probability course. To check this theory, the professor combines the data from the past few years:

Does this data suggest that "getting an $A$" and "living on campus" are dependent or independent?
Problem


In a factory there are $100$ units of a certain product, $5$ of which are defective. We pick three units from the 100 units at random. What is the probability that exactly one of them is defective?


One way to design a spam filter is to look at the words in an email. In particular, some words are more frequent in spam emails. Suppose that we have the following information:

Suppose that an email is checked and found to contain the word "refinance". What is the probability that the email is spam?
Problem *


You are in a game show, and the host gives you the choice of three doors. Behind one door is a car and behind the others are goats. You pick a door, say Door $1$. The host who knows what is behind the doors opens a different door and reveals a goat (the host can always open such a door because there is only one door behind which is a car). The host then asks you: "Do you want to switch?" The question is, is it to your advantage to switch your choice?


You and I play the following game: I toss a coin repeatedly. The coin is unfair and $P(H)=p$. The game ends the first time that two consecutive heads (HH) or two consecutive tails (TT) are observed. I win if (HH) is observed and you win if (TT) is observed. Given that I won the game, find the probability that the first coin toss resulted in head?


A box contains two coins: a regular coin and one fake two-headed coin (P(H)=1). I choose a coin at random and toss it $n$ times. If the first $n$ coin tosses result in heads, what is the probability that the $(n+1)^{th}$ coin toss will also result in heads?


A family has $n$ children, $n\geq 2$. We ask from the father, "Do you have at least one daughter named Lilia?" He replies, "Yes!" What is the probability that all of their children are girls? In other words, we want to find the probability that all $n$ children are girls, given that the family has at least one daughter named Lilia. Here you can assume that if a child is a girl, her name will be Lilia with probability $\alpha \ll 1$ independently from other children's names. If the child is a boy, his name will not be Lilia.


A family has $n$ children. We pick one of them at random and find out that she is a girl. What is the probability that all their children are girls?


The print version of the book is available through Amazon here.